With liquid light painting performance by Atsushi Harata, and music by Atsuko Hatano 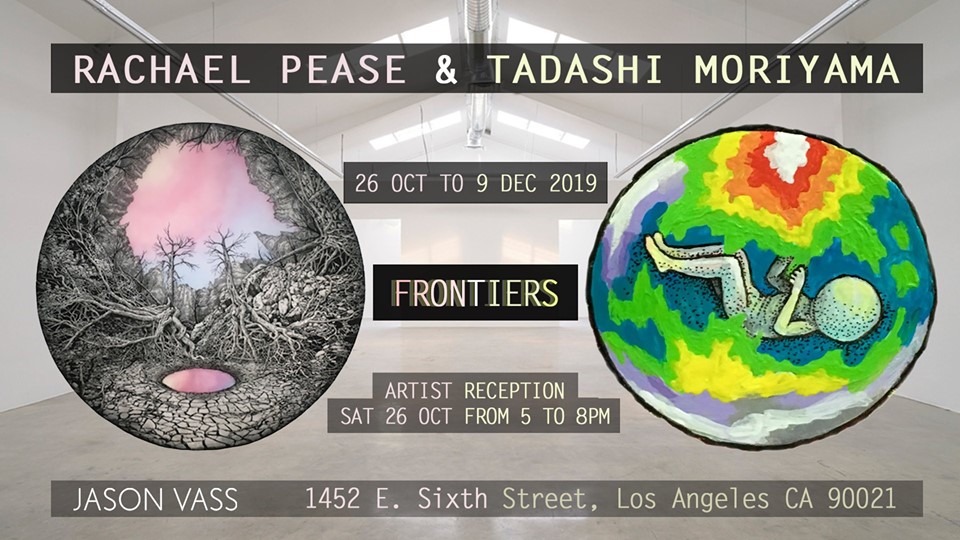 Both Pease and Moriyama cherish intricate and painstaking drawing by hand, with ink.  Their complex visual vocabularies arise organically out of their daily lives, where they are from, and the world around them. This process is their version of mandala making, a way of meditation. Their works require time to slow down, look closely and experience; which we often do not have time for in the fast-paced digital era.  There is an inherent storytelling in their bodies of work, with the narratives left unfinished, inviting mystery and contemplation.

The two artists – who met at graduate school at the University of Pennsylvania in 2004 and married in 2007 – chose the show’s title to reference their move from New York City to Los Angeles in 2013, a journey they made with hopes of finding a new life in this historical western frontier. They since have had two children, and “Frontiers” also speaks to the uncharted territories of parenting, which have been an inspiration to them both. In their works, they channel the discovery process of life to create imagined vistas full of wonder.  Moriyama says, “In our art making process, we look for the unknown and unexplored, and attempt to make images that are new to us, and give us unexpected and serendipitous surprises.”

Moriyama’s works – which are acrylic and ink on paper, often stretched on wood – are visually based on urban grids, and interstellar environments.  Buildings and neural networks fill his works, referencing the cityscapes of Tokyo and New York, where he spent most of his time in his teens and 20s.  His pieces pull from a broader range of inspiration though – digital communications, dream interpretation, environmental concerns, and space exploration are in the mix.  His first artistic training was in the art of Japanese calligraphy, which, along with Zen Buddhism, he began practicing at age 6.  Through calligraphy, he learned to achieve fluidity in the lines he draws.  Through meditation, he conjures up his otherworldly images, the artworks growing over time in his mind’s eye.  Pieces take weeks, often months to complete.

Pease, who grew up in rural Indiana surrounded by vast lands and forests, explores nature in her works, which she creates with India ink pens on frosted mylar.  Her pieces often start with a tree she’s found and likes – in the woods, at national parks, and sometime in the city.  She takes pictures from different angles, prints them, and stitches them together to make collages, transforming what she’s observed in her daily life into surreal and timeless landscapes that contemplate the impermanence of the natural world.  Pease has exhibited internationally, and has been the recipient of many awards, scholarships and grants including I.U.’s International Experience Grant to study in Italy, the Harry Engel Scholarship in Painting and Drawing, the Charles Lanham Fellowship, the Vermont Studio Center Grant, and the Lawrence Shprintz Award for Excellence in Art.

“Frontiers” reflects on life beyond a border or boundary.  Whether traveling from east to west, or from the past into the future, the unknown is always just a step away, as things change and the unrecognizable becomes reality.