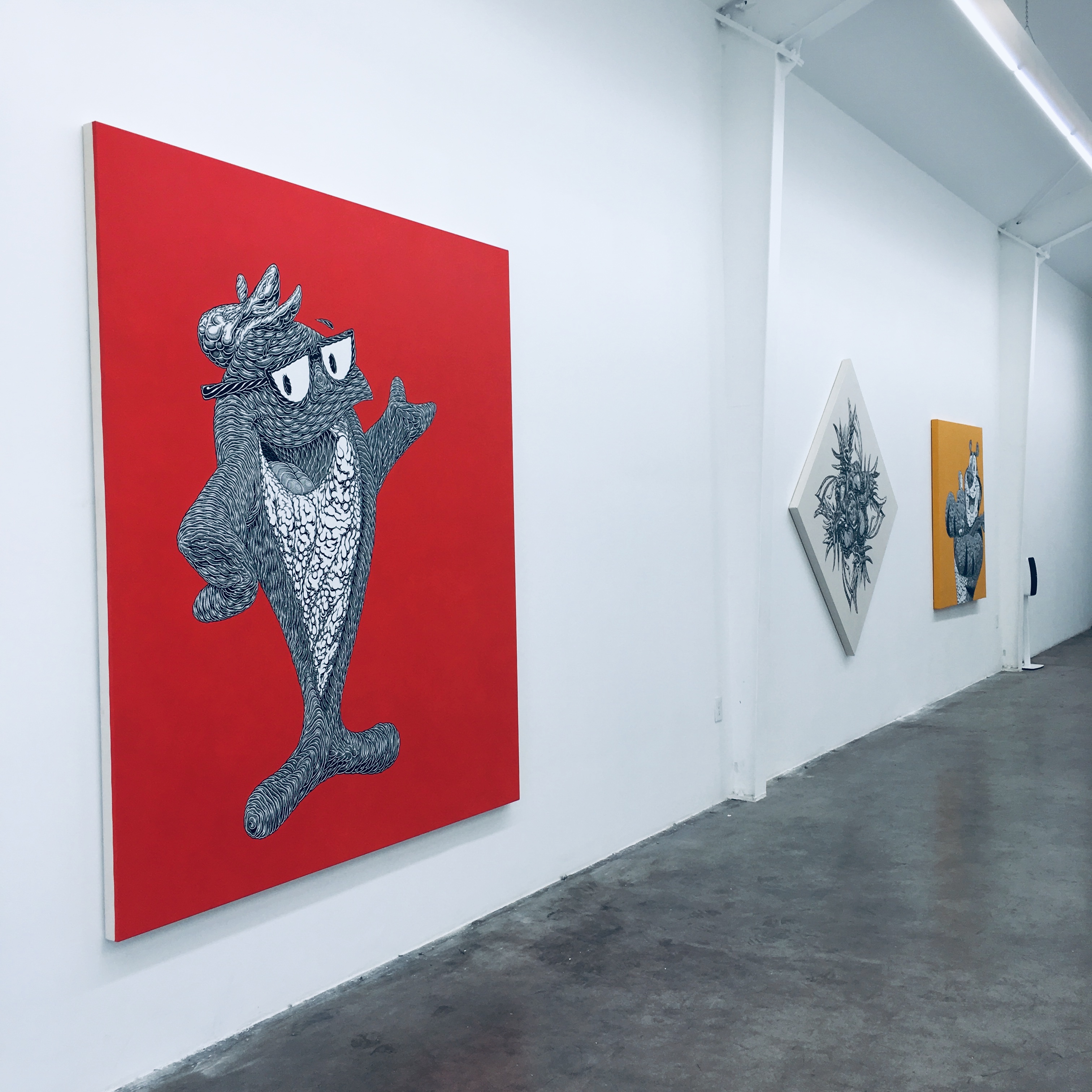 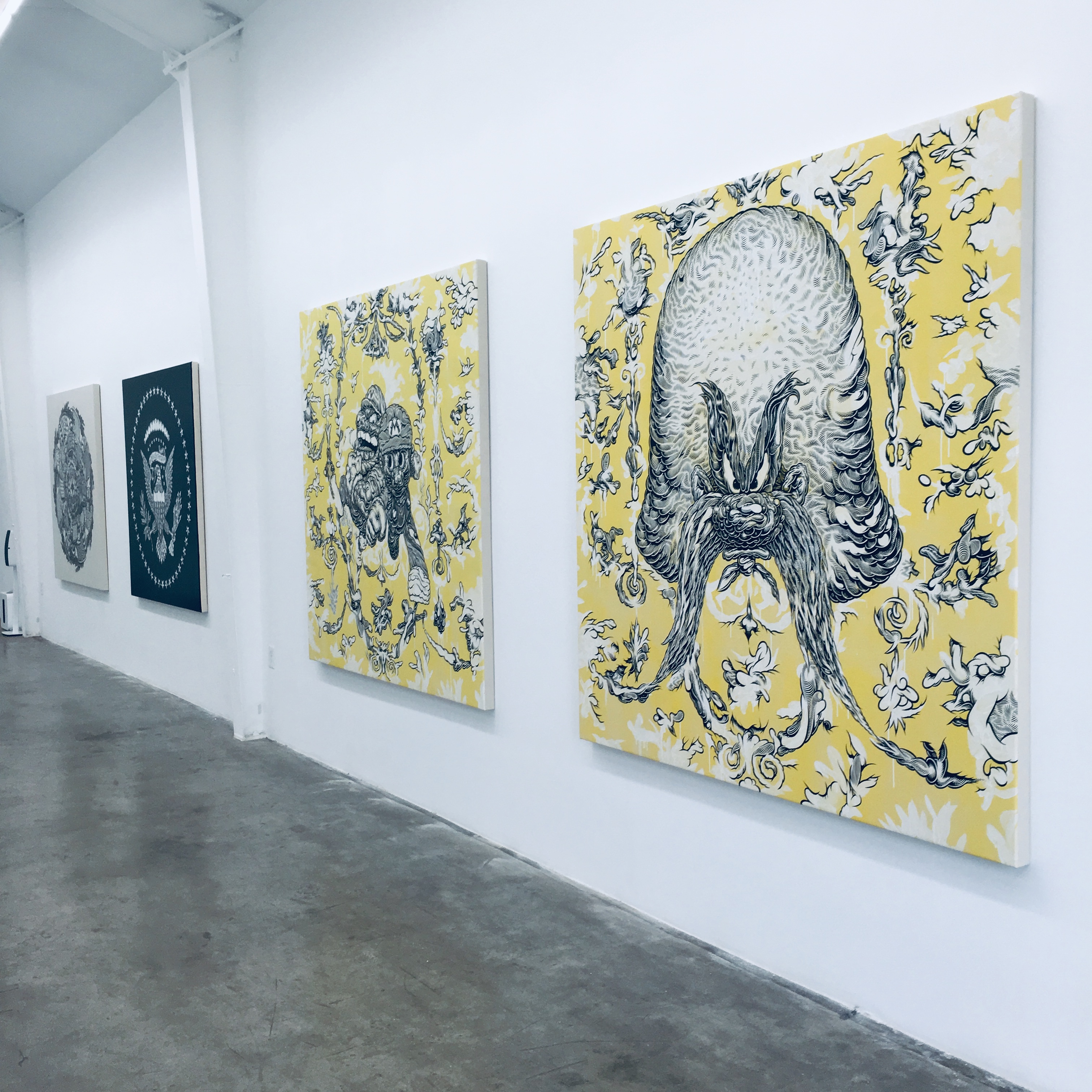 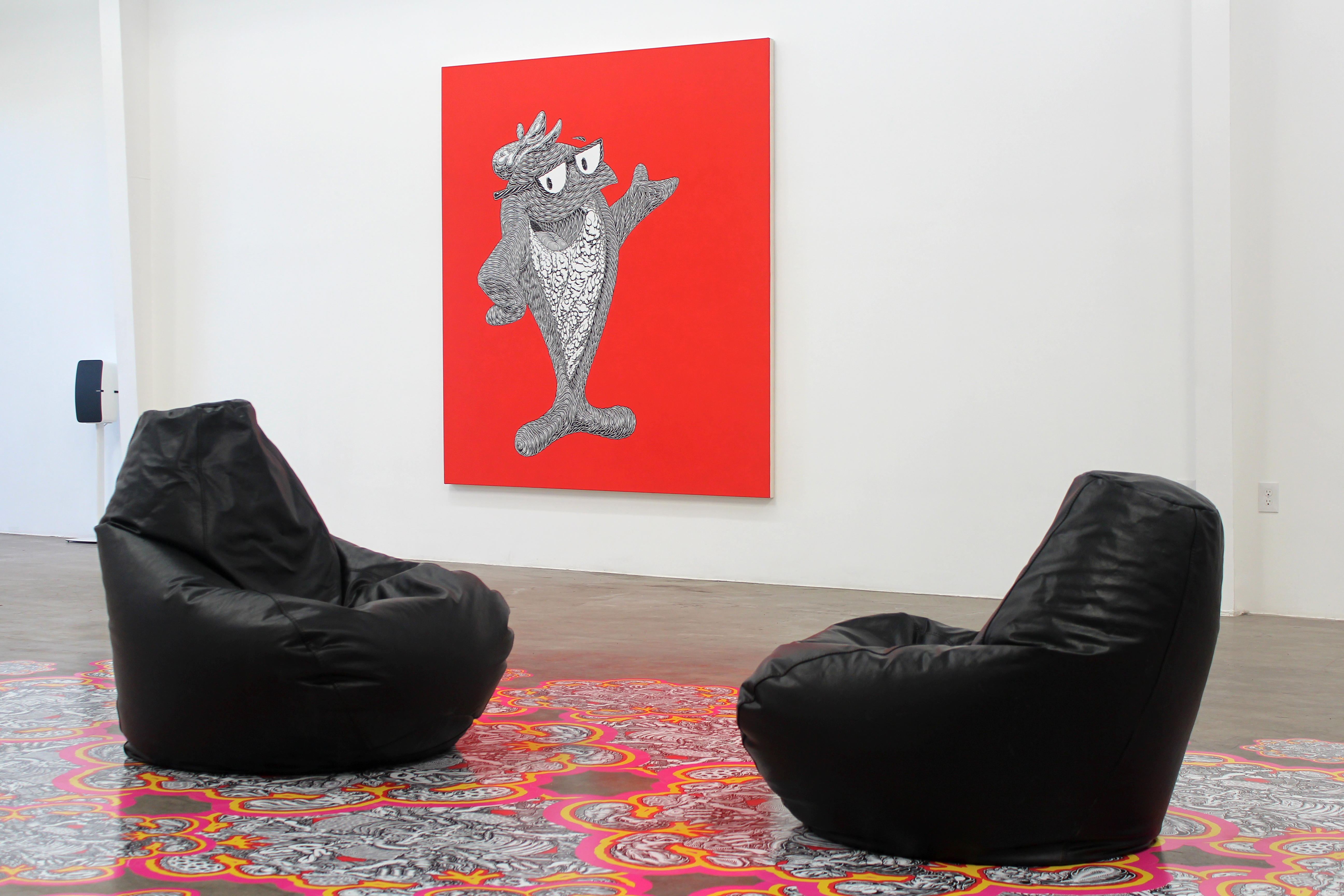 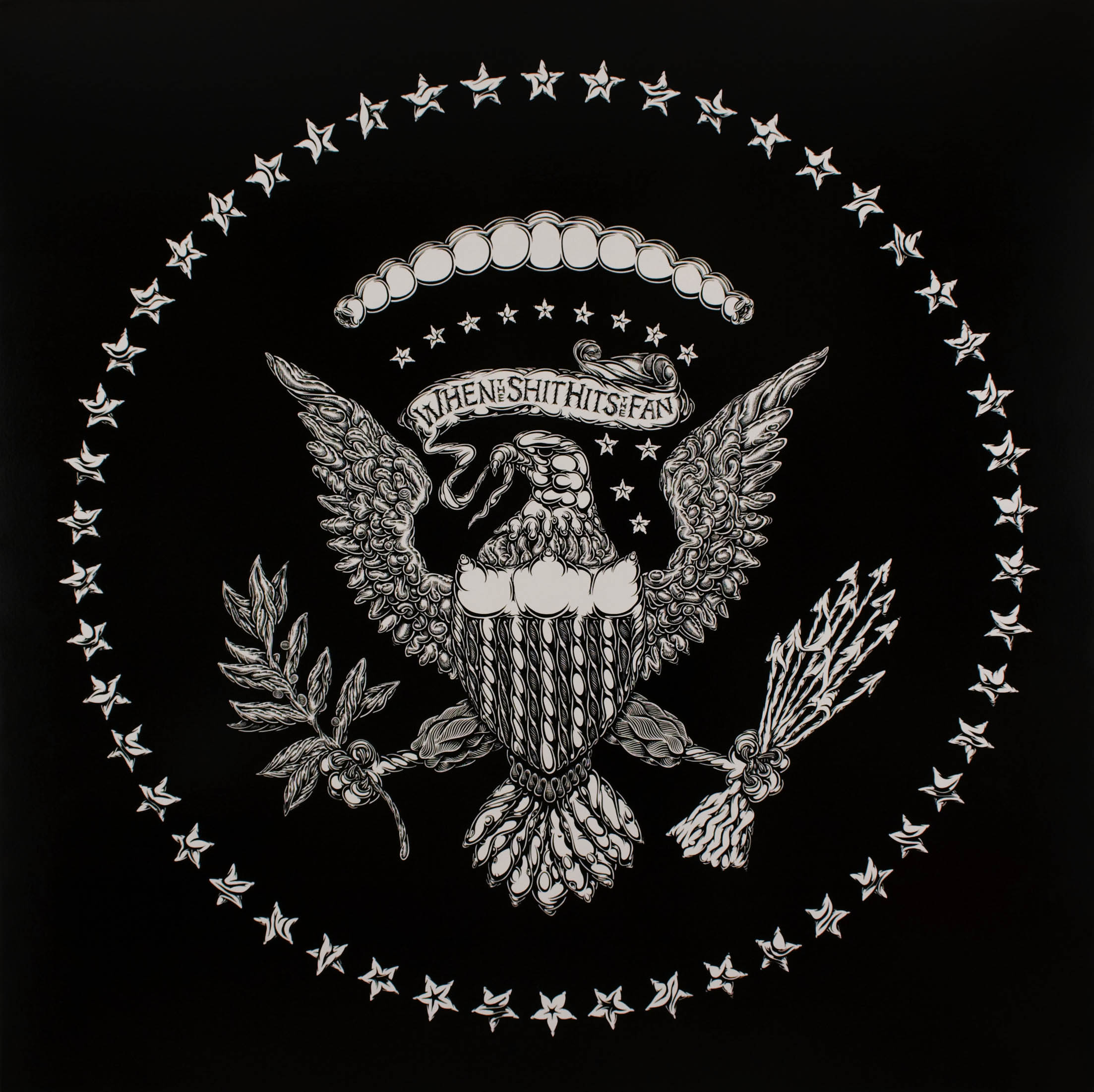 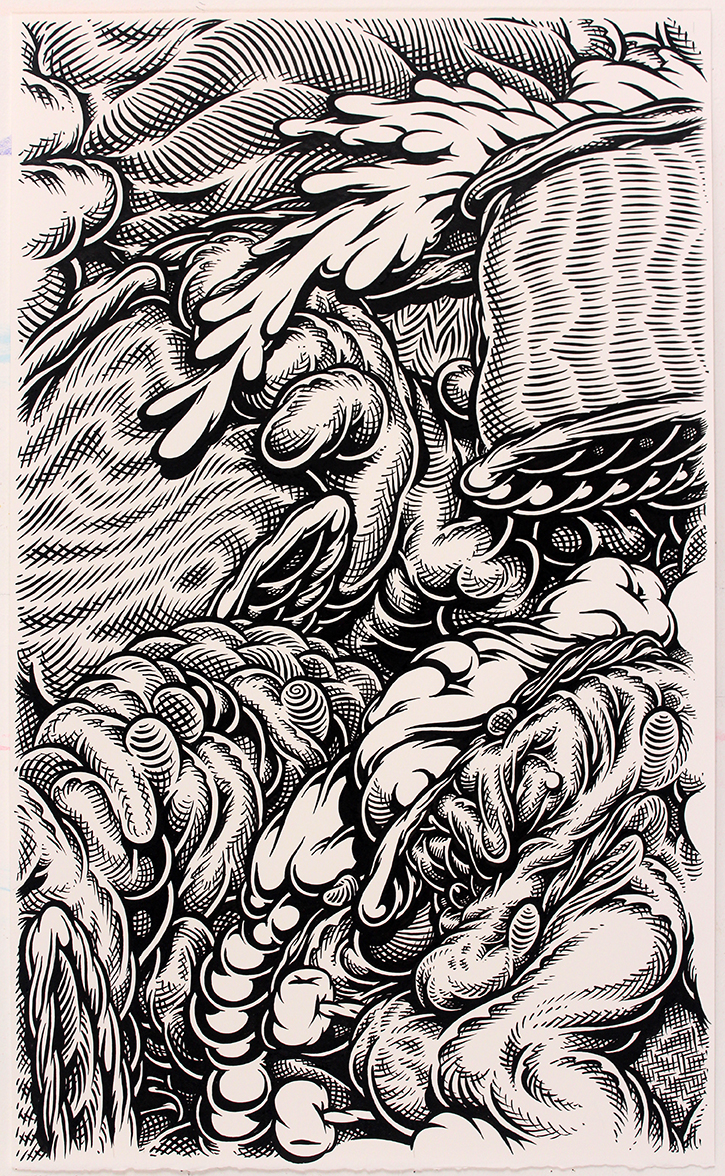 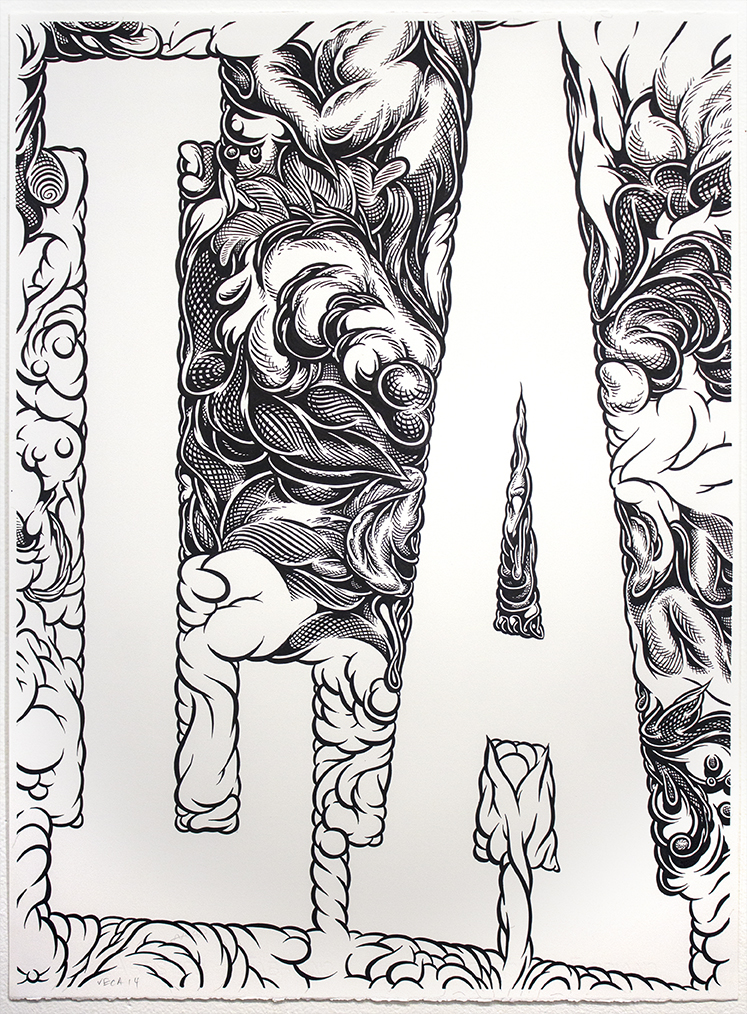 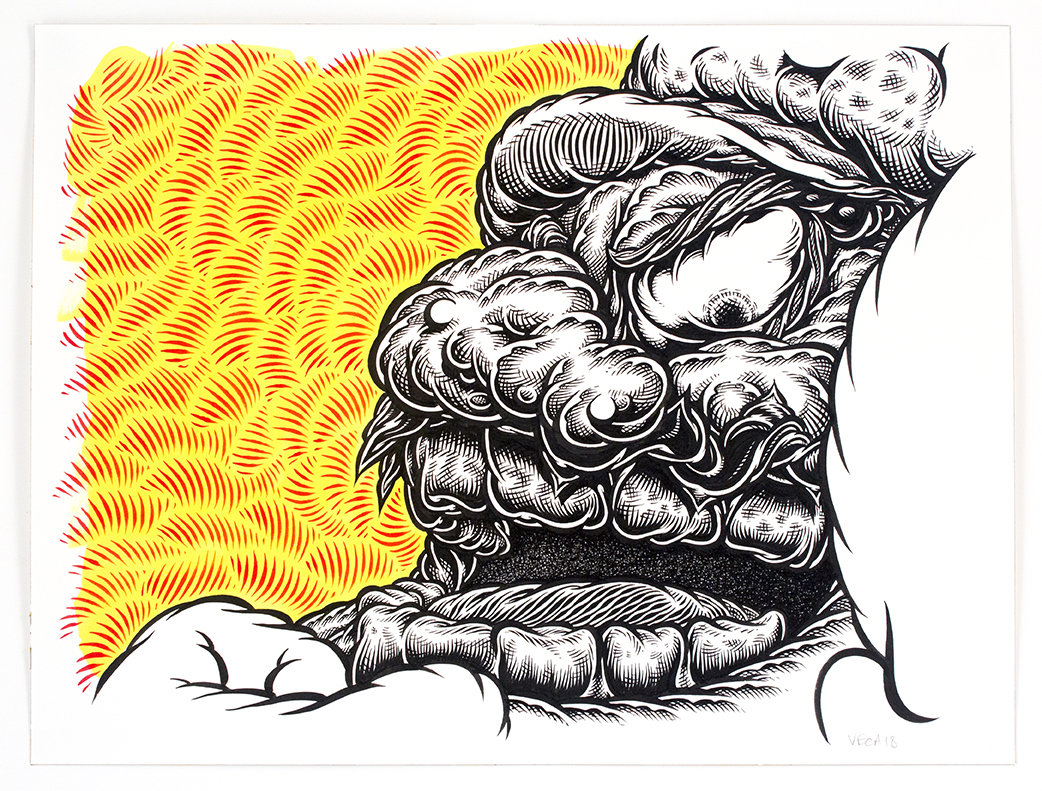 The Troubled Teens (Work of a Decade)

In painter Mark Dean Veca’s latest works, we see the evolution of the artist’s perspective on art history, popular culture, and the place of his work within that continuum. In The Troubled Teens, Veca achieves both a deeper narrative focus of his message, and a widening discursive expansion of his vision and style.

Veca has always made certain eccentric art historical references in his work, specifically the hyper-stylized, elaborately patterned, decor-derived, hand-rendered and often architecturally integrated paintings for canvas and wall. He has deployed those aesthetic citations, like Neo-Classicists before him, to construct allegories of present-day cultural issues. But now he makes the political dimensions of that oblique critique much more explicit. This is true in his large-scale black and white works especially — the hyper-decorative botanicals that are both luscious and ravenous, and the Presidential Seal turned logo of propaganda.

Like every conscious citizen, Veca’s attentions have been diverted to the thorny political climate, with a special insight into the layer where the “medium is the message” plays out in our visual culture. By confronting the art historical context, we see in these works a late-Empire decadence, a corpulent excess bespeaking a new Rococo — which is not necessarily, Veca seems to warn, a good thing.

Mark Dean Veca is a Los Angeles-based artist who works in drawing, painting, public art, and installation. Born in Shreveport, Louisiana, and raised in the San Francisco Bay Area, he received his B.F.A. from the Otis Art Institute in Los Angeles. In April 2018, the Crocker Art Museum announced Mark Dean Veca as the second recipient of the John S. Knudsen Endowment Fund’s $25,000 prize. Most recently, he has been commissioned to create a major new work of permanent public art for one of the new Los Angeles Metro stations on the Purple Line.

Veca has exhibited extensively in solo and group exhibitions internationally at venues including: PS1/MoMA, Queens, NY; Bloomberg Space, London; and the Orange County Museum of Art, Newport Beach, CA. Veca’s work has been reviewed in publications such as Artforum, The New York Times, and The Los Angeles Times among others. Awards and honors include a C.O.L.A. 2011 Individual Artist Fellowship, Pollock-Krasner Foundation Grant, and three New York Foundation for the Arts Fellowships. His work is in numerous public collections including the Deutsche Bank Collection, Frederick R. Weisman Art Foundation Collection, and the Pennsylvania Academy of Fine Arts Collection.