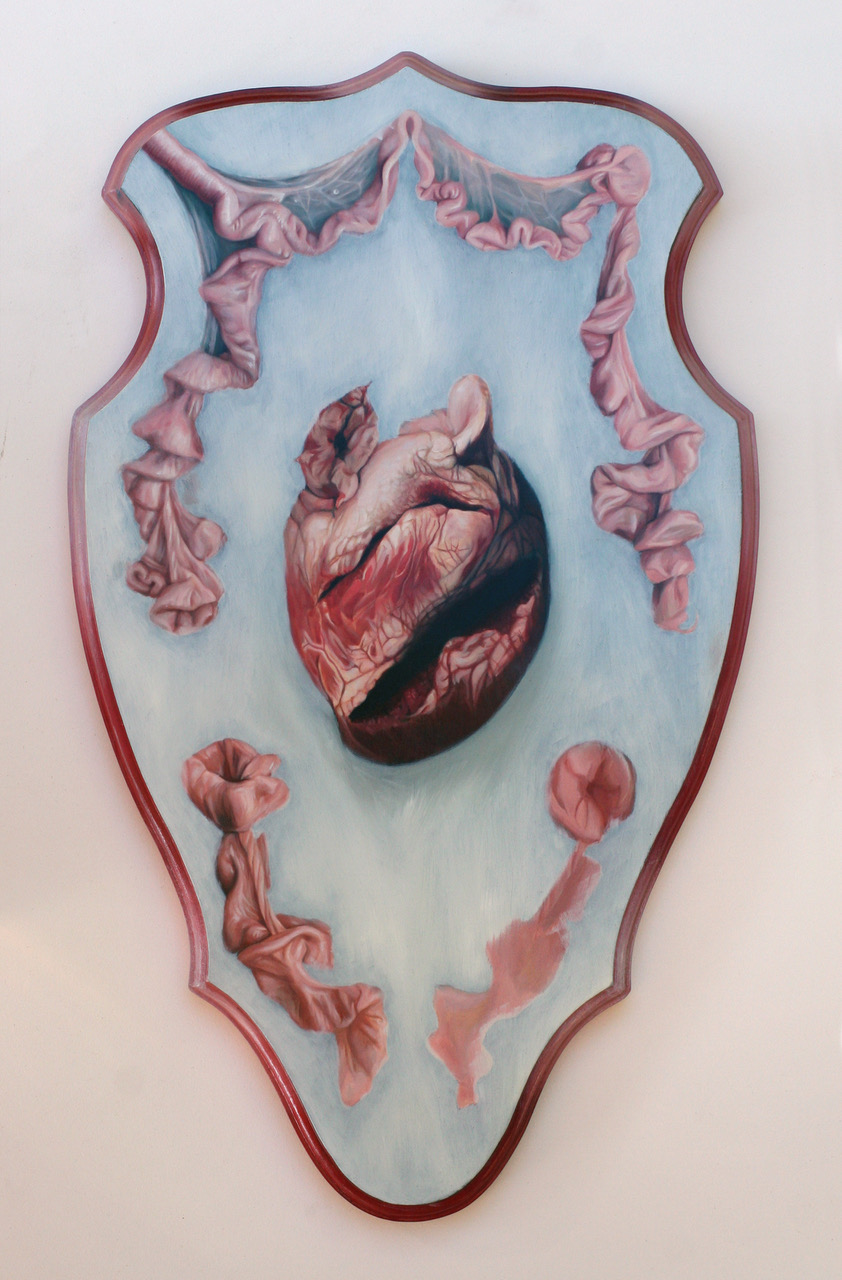 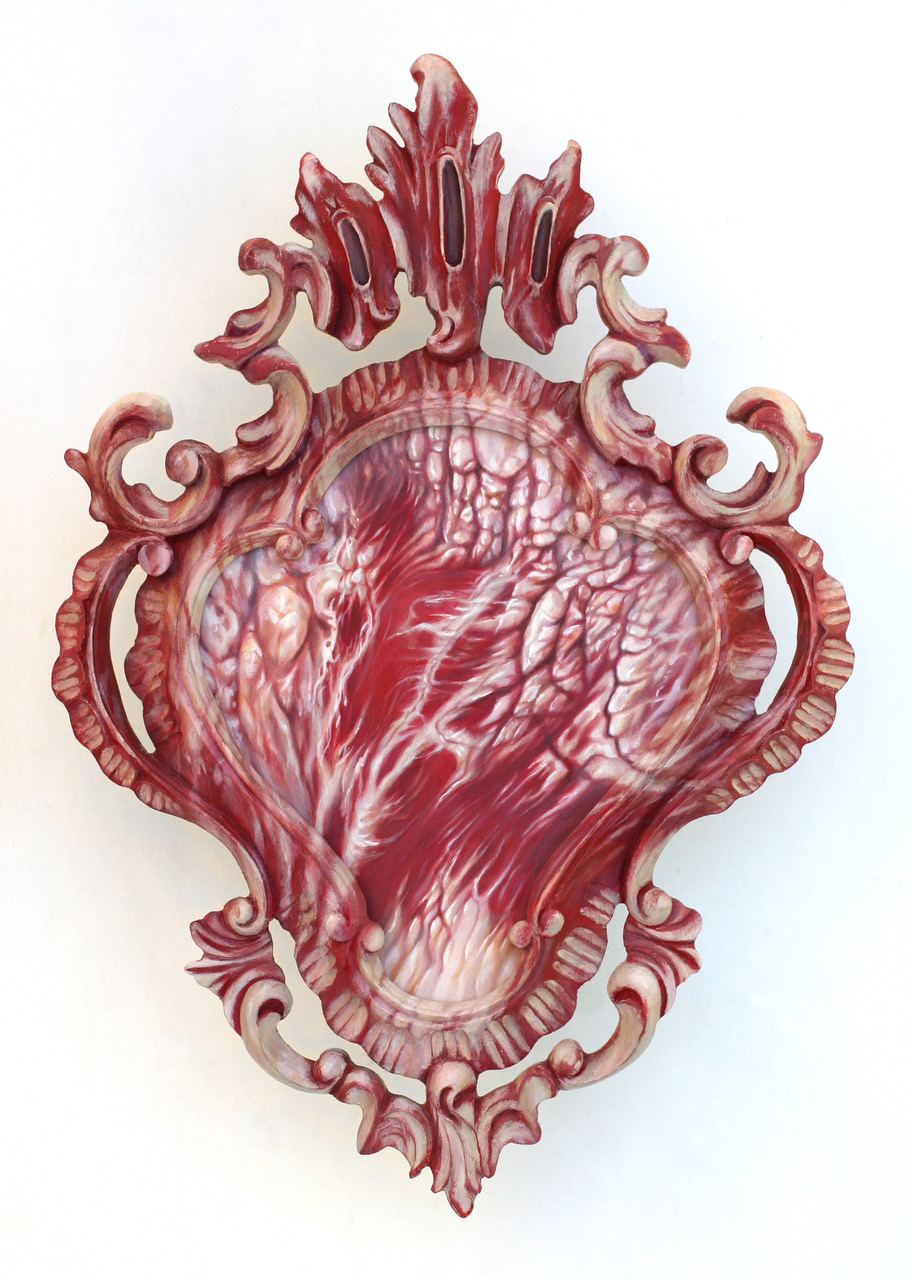 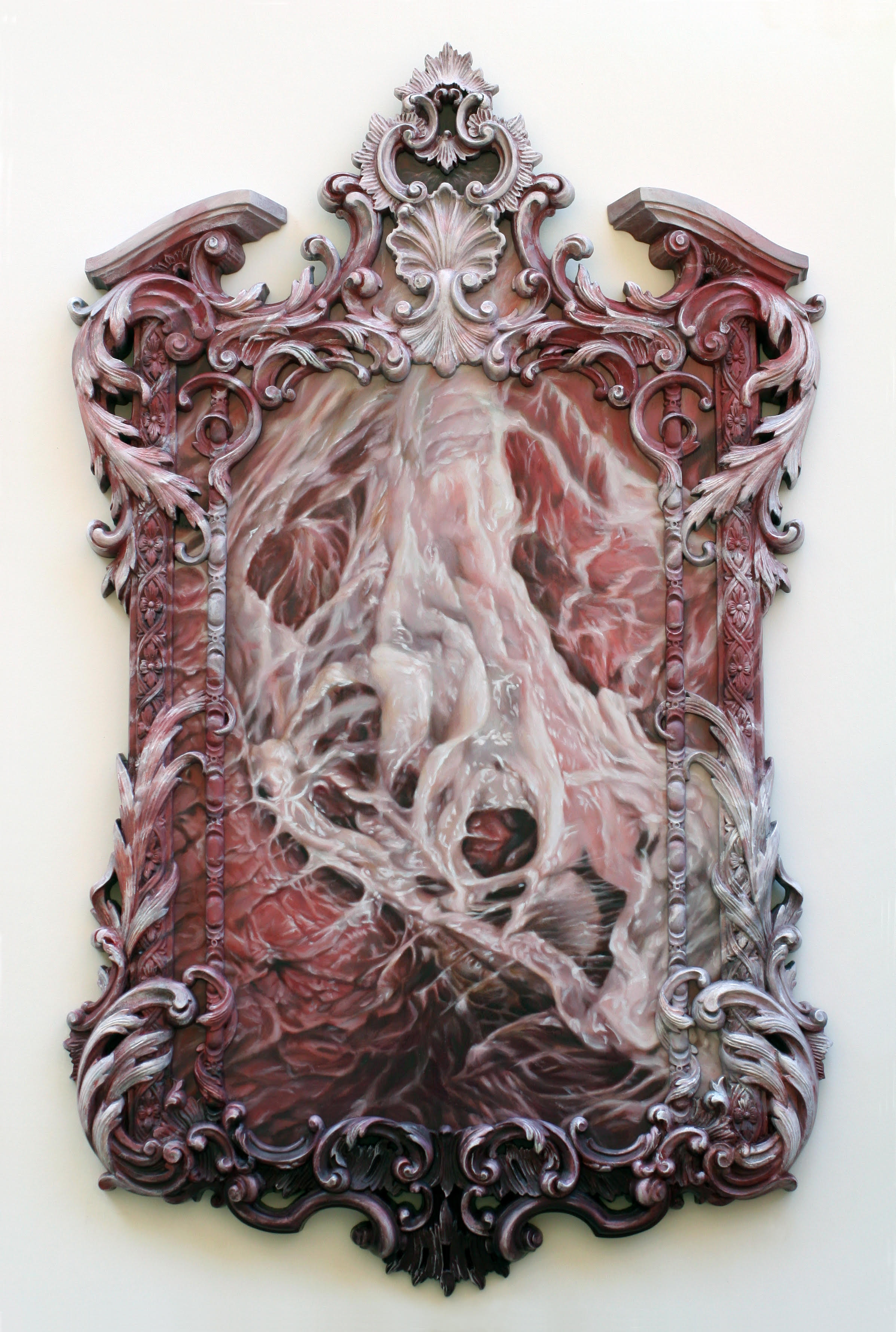 For over a decade, I have rendered detailed and sensual paintings of tri-tip sirloin, reindeer viscera, brisket, pork bung, and honeycomb tripe. I depict raw flesh for its associations with sensuality, love of the world, our carnal nature and mortality, and sins and pleasures of the flesh. The works are often ornate, even gaudy or carnivalesque. (“Carne vale” in Latin means “farewell to meat,” traditionally a time for one last chance to indulge in pleasures of the flesh before the onset of Lent.) In the paintings, the subject’s beauty is emphasized, as well as paint’s physicality and seductive nature. And since oil paint was invented to render flesh realistically, I’m using it for its original purpose! Ideas of “temptations of the flesh” and a strong suspicion of the beautiful, seductive image live on in Western thinking. Various works of mine refer to the Venetian art of painting flesh, Dutch vanitas, kitchen and butcher stall scenes, divine sacrifice, and humans’ use and sacrifice of animals. Our distinction between flesh and meat is arbitrary, and the flesh sacrifice of the countless animals we consume is often without thanks or thought. In Rembrandt’s Slaughtered Ox and Beuckelaer’s Slaughtered Pig, large animals are spread and hung like crucifixion scenes. Sacrificial animals include the ox, lamb, dove, and chicken, among others. (Jesus likened himself to a mother hen.) For centuries, paintings of butchered meat have referred to “the weak flesh” and “the way of all flesh,” and a slaughtered animal can symbolize the death of a Christian believer. Chaim Soutine was obsessed with Slaughtered Ox, and Francis Bacon continually revisited Velasquez’s Innocent X. Austrian Actionist Hermann Nitsch’s bloody performances and relics reenact divine sacrifice. Paul Thek’s ornate reliquaries house wax-sculpted pieces of meat. All these works ooze with Catholic imagery. In Bob Flanagan’s and Sheree Rose’s work, the body and flesh, sickness, and pain are emphasized. Like saints mortifying their flesh, this performance team employed whips and various instruments, recalling the Arma Christi. Customs of representation are alluded to in my paintings of flesh. Seemingly imbued with life, blood, muscle, and fat, they are dead representations fashioned of Titian-like layers of oil paint. Much of their tension lies in the subject and its realistic representation. Some viewers initially deem a meat painting beautiful—until they realize the subject is flesh, from which they heartily recoil! (Is it from guilt of visually partaking of the image, exploring its corporal, visceral wetness, or a grim reminder of their own mortal flesh?) These paintings of flesh draw a red line between flat, abstract colors and shapes and an illusion of the real, undeniable, material flesh. Ornate frames bound many of my paintings, placing fleshly imagery into a specific context of &quot;classic&quot; or vaunted artwork—dishing it up as artful, artificial decor. Served here are mere representations of the physical, animate, palpable flesh in its ruffled sumptuous tissues, corporal victuals, marbled sirloin, globular clusters of
glistening crown-roast fat, and medallions of flesh. Like stained-glass windows, incarnadine glazes may enhance the illusion and instill the paintings with a living presence.